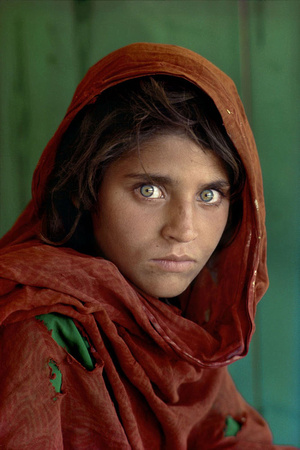 Steve McCurry's portrait - The Afghan Girl must be one of the most famous travel portraits of all time. The photograph has been likened to Leonardo da Vinci's painting of the Mona Lisa and has been called "the First World's Third World Mona Lisa".

The subject of the photograph was called "the Afghan Girl" by the public until she was formally identified in early 2002 as Sharbat Gula, an Afghan woman who was living as a refugee in Pakistan during the time of the Soviet occupation of Afghanistan when she was photographed. The image brought her recognition when it was featured on the cover of the June 1985 issue of National Geographic Magazine at a time when she was approximately 12 years old.

Portrait photography is not just about making a portrait, it is about capturing a moment, an emotion. And for this to happen, the photographer must interact with his subjects, love people and know how to catch the right moment.

Here is boredpanda's top-10 list of photographers that are famous for their portraits of people from around the world. http://bit.ly/1BUR6HK